We host a number of events throughout the year, including our annual International Trade Conference. 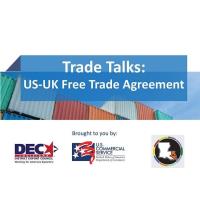 Trade talks between the US and UK have officially begun, so our group of panelists are will explain the impact of a potential deal

Join the U.S. Commercial Service, the Louisiana District Ex-port Council, and Greater New Orleans, Inc for a dialogue with Richard Hyde, Consul General, Consulate of the United Kingdom in Houston. Hear how this free trade agreement would join the world’s largest and fifth-largest economies—and what it could mean for your company.

Richard Hyde has served as Her Majesty’s Consul General in Houston since June 2019. As Consul General, he leads the UK’s engagement in the states of Texas, Oklahoma, Arkansas, Louisiana and New Mexico.

Among his priorities are enhancing trade and investment partnerships between the UK and the US. His previous diplomatic postings include Venezuela, Costa Rica, India, Armenia, Saudi Arabia, and France, as well as various positions in London.

Brought to you by:

This event is hosted by our trade partner, US Commercial Service.
Click here for more information or to Register for webinar now!

Premier annual luncheon ceremony honoring an individual who has made significant contributions to the maritime industry.